by Mwova Mwende
in AGRIBUSINESS, Dairy, FEATURED
Reading Time: 5 mins read
A A 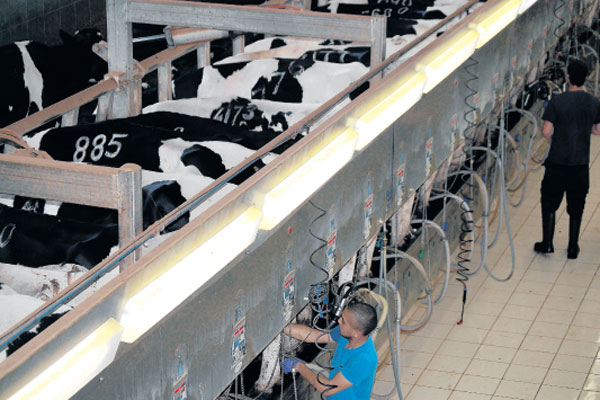 Israeli Dairy Farms: The success of Israel’s dairy industry is largely due to widespread use of advanced farm management practices and technology.

Afimilk Farm, on the outskirts of Tel Aviv, is a hallmark of dairy technology. Its Holstein Friesian cows are huge; very huge, weighing an average of 600kg with bulky udders that appear inflated.

The farm has 1,200 lactating cows and about 800 heifers. Each of the animals is fitted with a microchip (pedometer) that records what it does and helps in understanding its behaviour.

“Any slight change in temperature affects the cow, which is why the pedometer comes in handy in letting us monitor the behaviour of the animal, with the data being transmitted to the computer in real-time. From this data, we know when the cows are to be fanned, safeguarding our milk quantity and quality,” explains Afimilk sales manager Ofer Tamir.

Diseases and pests are also detected using the gadget as soon as they attack the animal.

“If a cow lies down for a long time, it may be sick; if it is jumpy, it could be on heat or has an infection.”

Each cow consumes 45kg of feeds made up of wheat, cotton seeds and mineral supplements, among others, and they drink 150 litres of water daily. Afimilk spends about Sh752 daily to feed each of the 2,000 cows.

During milking, the cows move into the parlour in clusters of five. They get in without nudging and relax as the milking machines are fixed on their tits. They are milked three times a day for an average of six minutes.

“We get a minimum of 40 litres a day from each cow. Once a cow starts producing below 20 litres, we sell them for meat.”

But at Afimilk, it is not about the quantity of milk. They have developed the Milk Analyser, a computer system that ensures collected milk is of high quality as it checks proteins, fats, lactose and infections.

Through the analyser, mastitis, though rare at the farm, is detected early, therefore, “there is a guarantee of fast recovery, low treatment costs and reduction in cows sold due to the disease”.

Also part of the comprehensive herd management system is the AfiAct, which is an automated heat detection and fertility technology that ensures they end up with quality animals.

“Concrete is bad for cows,” Tamir warns as an afterthought. “We let our animals walk on soil and their own dung that is levelled periodically in each barn. Farmers should avoid concrete pens.

Similar technologies are applied at Kibbutz Shaar Hagolan farm that sits on 1,000 acres at the foot of the Jordan Valley and hosts 150 families.

Kibbutz is a communal farming system in Israel.

The farm has 650 dairy cows, 350 that are milked and the rest are calves and heifers.

“You have to treat your cows as kindergarten children if they are to offer you the best,” says Brayen Dan, a tour guide at the farm.

As the cows at Afimilk, all the animals at Kibbutz Shaar Hagolan are fitted with microchips on the legs that send information to the computer on cow position, behaviour and if it is ready for insemination.

Milking is done at 4am, noon and 8pm, with each animal offering 35 litres a day. The animals are fed on silage made from grass, hay and wheat or corn grains.

All their produce is sold to a processing plant where it is used to make fresh milk, yoghurt and cheese.

From the dairy farms, our next stop is at Awasi Sheep Flock owned by Kibbutz Ein Harod Ihud in northern Israel.

As we enter the sheep farm, we are met by hundreds of ewes with two tags on the legs, one for identification and the other containing a microchip. The animals dart in the shed after noticing us.

There are 1,030 ewes and 70 rams of Asaf and Awasi breeds, which are milked twice a day; in the morning and evening, each offering three litres that is sold to a processing factory at Sh94 ($1) for making cheese and yoghurt.

“Each animal calves two lambs per labour three times in two years. After lambing, we milk them for three months, then synchronise their heat using hormones after two months,” says Haim Nor Yosef, the manager.

Each of the 70 rams serves three or four ewes for quality semen.

“The animals’ lifespan is five to eight years, after which we sell them,” says Yosef, adding that they do not keep the sheep for wool despite them having plenty of it because it is of low quality.

Lambs are kept in a nursery to curb mortality, which if not controlled is high among sheep.

“In the nursery, we feed them exclusively on colostrum and vaccinate against ecoli and foot and mouth, among other diseases. We first start by bottle-feeding them before we train them to suckle from a machine.”

One of the things that stands out at the farm is that they synchronise their coupling, lambing and thus milk production with price of milk in the market.

“We ensure that our animals do not lamb when there is milk glut like in September or any other month so that we can maximise on profits.”

They feed their sheep silage made from corn or wheat, alfafa or clover harvested before seedling. Barley and pellets made from soya beans are also part of the feeds.

Yosef explains that they do not cut the sheep tails to prevent diseases and pests. Cutting the tail creates a wound that pests find a haven.

Among diseases that affect the animals are pneumonia, coccidia, ecoli, foot and mouth and brucellosis.

After every two weeks, they vaccinate against botulism, a potentially fatal condition caused by toxins produced by Clostridium botulinum bacteria.

“This bacteria attacks the animals due to feeding on silage, which often is contaminated with pathogens and pests like rats,” says Yosef, adding that they change bedding made of sawdust every three weeks.

Omangi was part of a group of 80 farmers and investors who visited Israel to attend an Agritech conference in Tel Aviv, various farms as well some of the country’s historical sites.

Caroline Gichuki, the director of Techfarm Tours and Travel, which also organised a farmers’ trip to Israel, noted they choose the country because of its best farming practices. Israeli Dairy Farms.