Preventing Corona Virus in Kenya: The flight from China that landed yesterday at the Jomo Kenyatta International Airport was...
Read more

Wheat Farming: Kenya has lifted the prohibition on US wheat following a deal between President President Uhuru Kenyatta and...
Read more
Bizna Reporterhttp://bizna.co.ke

KNUT Membership: BY SUNDAY STANDARD: Shocking revelations have emerged of some 90,000 teachers who have pulled out of Knut in an ongoing tiff between the union and the teachers’ employer.

It is understood that the fear of being locked out of the ongoing promotions and the looming deduction to recover monies paid to Kenya National Union of Teachers members following implementation of Collective Bargaining Agreement two years ago is behind the mass exit.

The matter has further been complicated by primary school heads, who lead institutions with majority membership of Knut, disowning the union’s push to fight for them, further isolating the union.

Sources within Knut leadership ranks yesterday hinted that the likelihood that TSC may not honour any meetings with the Knut leadership to push for teachers’ benefits has further driven away members.
The tutors’ employer deregistered Knut Secretary General Wilson Sossion from the teachers’ roll, arguing that the teachers’ code of conduct and ethics required them to maintain political neutrality at all times and not act in a manner that may compromise or be perceived to compromise their neutrality.

The decision to strike Sossion off the roll has split Knut leadership down the middle, with a crisis meeting called last week to plan for his ouster in the special National Executive Council (NEC) meeting postponed to next Thursday.

“We are in a tight corner as a union because we are unable to even run operations at the branches. But we have one last chance to rescue the union from collapse this week during the NEC meeting,” said a high-ranking Knut official.

The number of members who have exited Knut could also be higher as more teachers continue to exit the union citing stalled benefits of the Third Phase of the Sh. 54 billion Collective Bargaining Agreement (CBA). Last month, TSC ran a parallel payroll, locking out all the 190,000 Knut members from the benefits of the CBA signed in 2016.

TSC said it was complying with an order issued by Judge Byram Ongaya that set aside Career Progression Guidelines rolled out in 2017 and reverted to the old Schemes of Service to guide promotions of all teachers under its payroll. 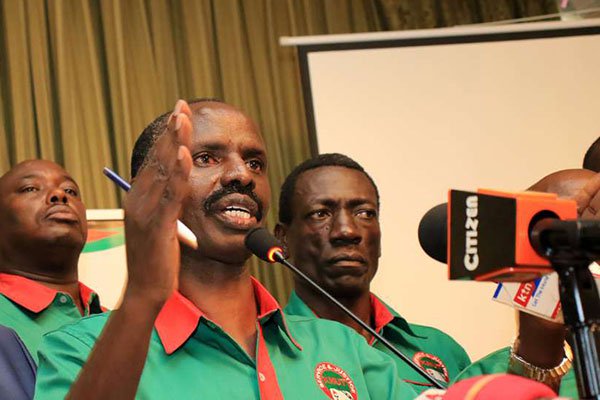 The Commission adopted career progression guidelines in 2017 to enable the implementation of the job evaluation exercise and the CBA that were signed in 2016. It also emerged that the impending recovery of the monies already paid to Knut members after implementation of the 2016 CBA has further necessitated the mass exit.

TSC argues that the payroll under Schemes of Service has posed numerous challenges.

“It translates to overpayment of salaries which the commission is bound by law to determine and recover as government liability against the respective teachers,” TSC said in an August 8 statement.

So far, all the 318,000 teachers have been benefiting from the 2017-2021 CBA signed between TSC, Knut and Kuppet. TSC has indicated that it is currently analysing the extent of the resultant overpayment.

“It is important to note that in the normal course of its business, the commission recovers erroneous payments as and when the same are detected such as allowances paid for a teacher who was transferred after the payroll is run,” said Nancy Macharia, TSC Chief Executive Officer. KNUT Membership.

Preventing Corona Virus in Kenya: The flight from China that landed yesterday at the Jomo Kenyatta International Airport was...
Read more
NEWS

Muranga Billionaires: Most of the central Kenya billionaires come from the same Rwathia village of Kangema, in Murang’a, succeeding in taking their businesses beyond...
Read more
AGRIBUSINESS

The 6 crops that will make you a millionaire quickly

Most profitable crops to grow in Kenya: Everyone likes making smart quick money, Right?  Now if you’ve passion for farming but with limited capital...
Read more

Youngest Phd Holder in Kenya: Born and raised in Mbiriri village at the foothills of Mt Kenya in Nyeri county, Dr Purity Ngina could...
Read more

The new salaries 100,000 teachers will earn from July 1 in new deal

We were poor and hopeless, but now we have wings to fly

Katy Safari was the brightest pupil in her class. She had maintained a high academic performance throughout her primary school years. Her teachers had...
Read more

Every teacher in Kenya to pay Sh. 6,000 TSC training fee