TSC Replacement Posts: Teachers working under the TSC internship program are free to apply for the advertised permanent replacement vacancies.

This was announced on the commission’s Twitter handle following a question by an aspiring teacher identified as Tony Kauma. Mr. Kauma asked the TSC the following question:

“Are teachers on internship allowed to apply for the replacement posts?” 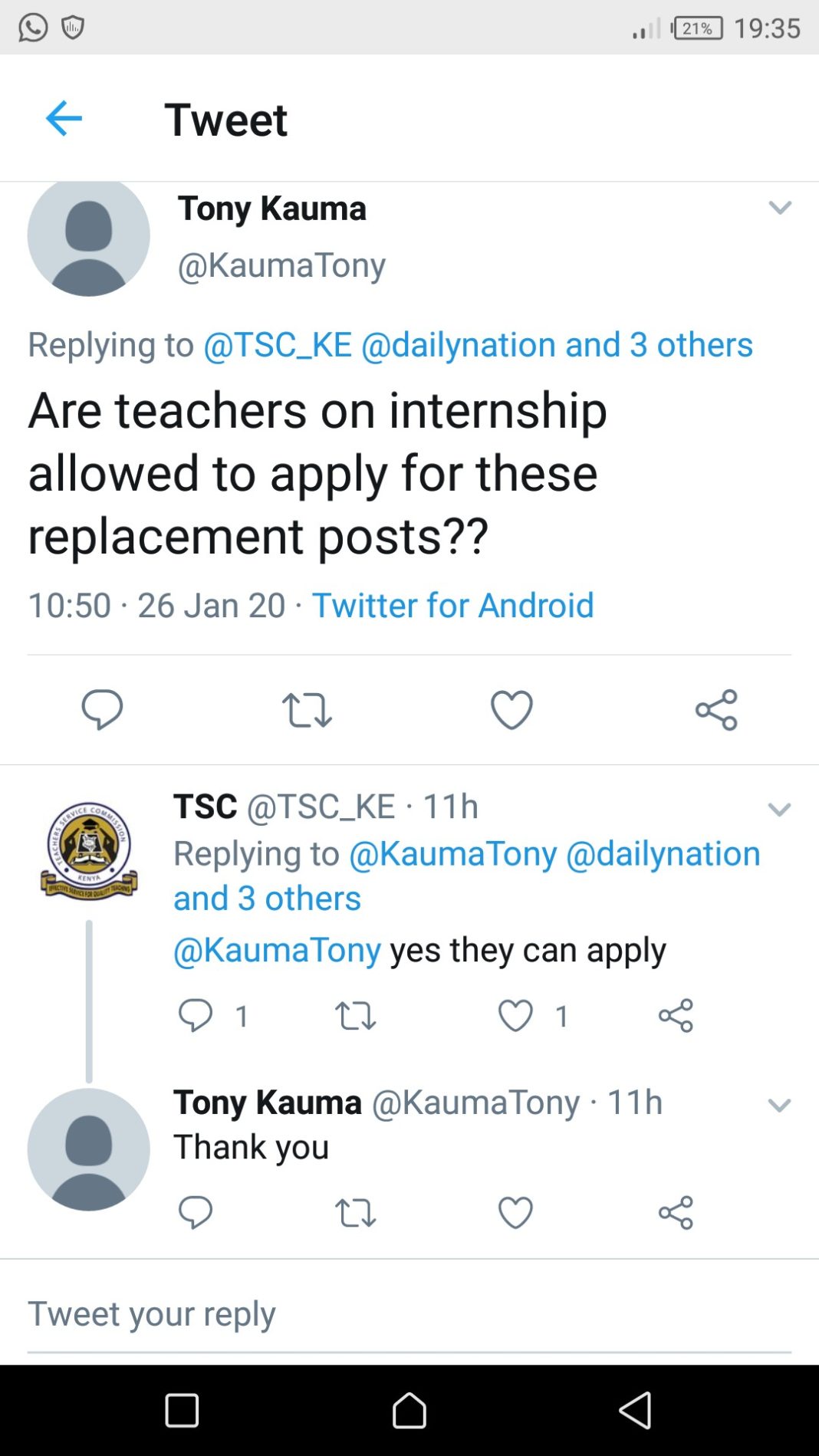 The TSC is set to employ teachers to replace those who left the profession in the last quarter of last year through natural attrition countrywide. The replacement of 529 teachers who exited service due to natural attrition will cover the months of September, October, November and December 2019.

In October last year, the Teachers Service Commission (TSC) announced the recruitment of 10,000 teaching interns in a bid to bridge a gap in the teaching sector. The commission deployed 4,300 teachers in primary and 6,000 tutors in Secondary.

The terms for these interns were overly stressful. They were expected to be ready to be posted to any part of the country. They were also required to have a personal accident insurance to cover personal risks 12- month internship period.

In July last year, the TSC announced that Sh. 2 billion hasd been set aside to hire teachers to supplement the over-stretched staff. Teachers Service Commission (TSC) Chief Executive Officer Nancy Macharia told MPs it would require up to Sh. 2 billion to recruit the intern teachers. “We need these teachers so that they can help us in addressing the shortage on the teaching staff,” Macharia told MPs early last year.

Macharia told MPs that a total of 12, 626 teachers are required to fully actualize the 100 per cent transition. TSC Replacement Posts.

We were poor and hopeless, but now we have wings to fly

Katy Safari was the brightest pupil in her class. She had maintained a high academic performance throughout her primary school years. Her teachers had...
Read more

Every teacher in Kenya to pay Sh. 6,000 TSC training fee

TSC Training Fee: The Teachers Service Commission has hit teachers hard with a new training rule. In the new rule every teacher in Kenya...
Read more

Degrees in Kenya: You may have heard the cliche, Grade A students work for Grade D students. Well, this feature explores why degree holders...
Read more

Teachers Salary Scale in Kenya: How much do teachers earn in this country? Well, this question can only be answered by looking at their...
Read more
- Advertisement -