Fridah Mokaya: This is the inspirational story of  Kenyan who is excelling in the field of science globally. It was first published BY AW MAGAZINE:

“You might think that “coming from nowhere with no connections” might stack against you, but you could say it worked in my favor. I can now proudly say my name is Dr. Fridah Mokaya, of course the “Dr” being the most recent addition to my name.

I am a second born in a family of 5 (4 girls and 1 brother who happens to also be the last born in the family). I was born and raised in Nairobi Kenya. I am lucky to have both my parents who went to great lengths to provide for us and make sure we got the best they could offer. I can never forget to give a special mention to my mother who was the disciplinarian and who ensured that we turned to be fine children in society.

I am the first person in my family to pursue a science course. Growing up I wasn’t sure how to get there or what the path would look like along the way, but I always knew where it would lead. At early age, I recognized that I wanted to be a scientist and as soon as I learned to be a scientist is a profession like any other, I promised to do whatever it takes to get that which my heart wanted.

After my Primary school, I joined Pangani Girls High School. Being a middle child and since my older siblings (they are twins) had gone to the same school, this became my dream school based on their reviews! It was in this school that my future was shaped.

In Form 3, we had to choose our specializations either in Sciences or Humanities. This would be determined by an examination with a cut off mark set at 70%. I remember I scored a 68%, narrowly missing the cut off mark for Sciences. Given my score, I was supposed to take Geography. 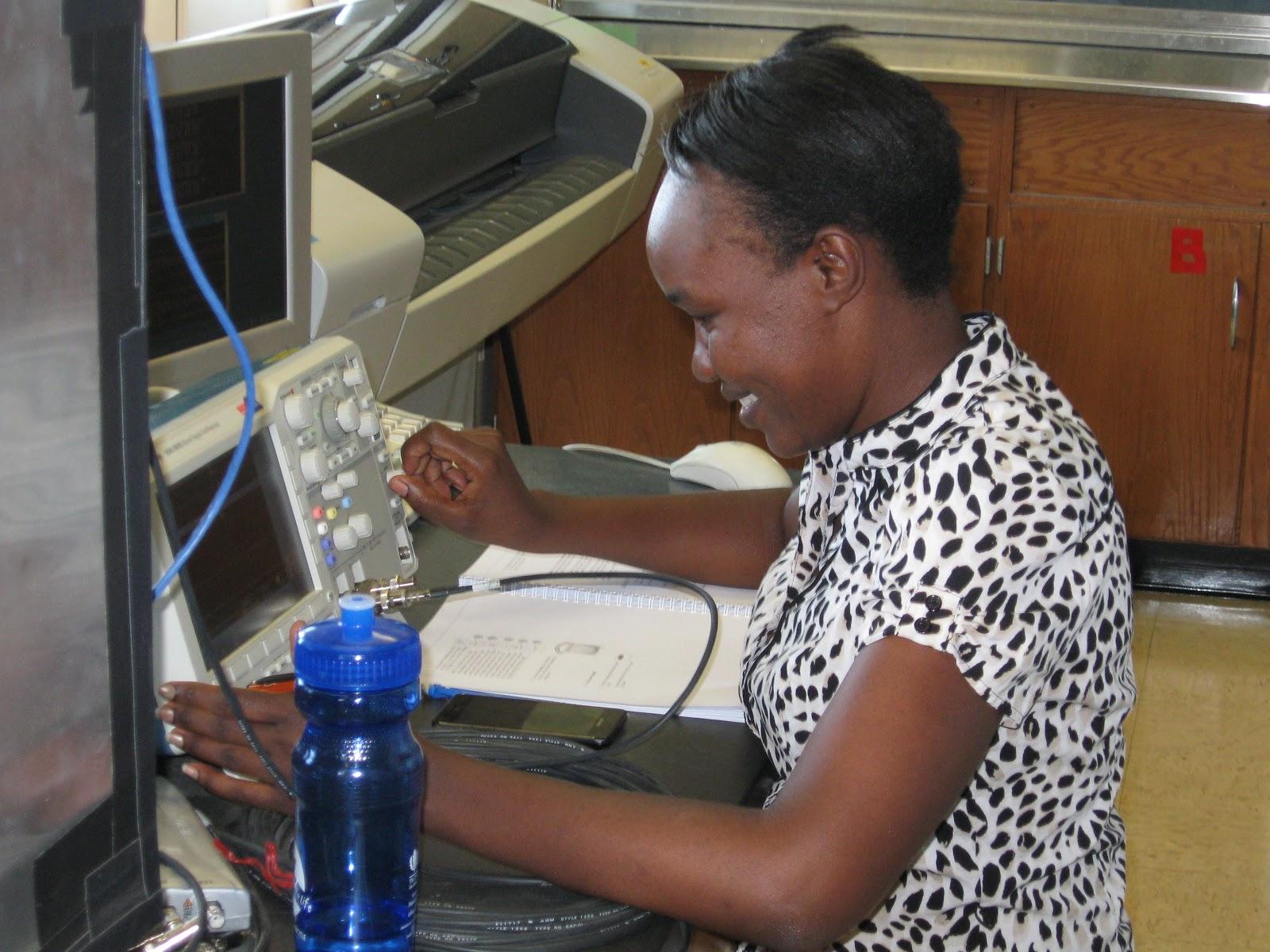 Well let’s just say God knew I had a future in Physics because I would not have it any other way. I refused to go to the Geography class and my dad had to be called to school to solve this issue.

One thing I will never forget is that in all this, my Dad did not talk much, he just told the teacher that I was his daughter and he knew me and what I can do and he had no doubt that I will excel in physics. This was the turning point. My Physics teacher Mr. Orinda, saw how distressed I was and knowing my potential told the deputy principal that he had allowed me in the Physics class on condition that I had to perform. Let’s just say that I worked hard and it paid off. I got an “A” in Physics when I sat for my KCSE exam. Looking back, I know that were it not for the deep belief that my parents and teacher had in me, I may not be where I am.

I was admitted to Jomo Kenyatta University of Agriculture and Technology in Kenya to pursue a Bachelor of science degree in Physics. When God is about to bless you, He prepares that path for you. I had a rough finish to university education. I did my four years in campus with very good grades and just a few days to graduation when the graduation list was out, lo and behold my name was on the second-class honors lower division list. I had never felt so distressed in my life.

All the arduous work I had put in, including the late nights for a second class lower? But I remember one of my Lecturers (Mr. Kamau) told me that no one can ever take what God had planned for you. It was hard to believe that statement at that time because I was very heart broken.
Immediately after graduation, I got a job with Barclays Bank Kenya for 7 months before I relocated to USA.

I guess the big question is how did I come to the US to study! While working at Barclays my heart was not settled, and I kept telling my dad that I want to go back to school and do my masters. Plans were underway to register for the Master’s program at the University of Nairobi. But then there’s this thing called LOVE that can change your path.

You know same was the Magnetic field changes the direction of particles (Physics must come in). I had a boyfriend (who is now my husband). We met just after I had cleared my high school. He left for the US a few months after I joined college. I remember he called me one day in July 2007 and while talking I mentioned to him about my plans on pursuing my Masters course.

He told me to apply to grad school in the US. At first, I was doubtful if it would work. I mean this was July and in the school, he wanted me to apply the classes were to commence in August.

I took a leap of faith and God did it again. I got accepted to Binghamton University (SUNY). I did a master’s degree (M.Sc. Physics) there and graduated. I later applied for a PhD Program at the University of Connecticut.

I started the PhD program at UCONN in the Fall of 2010. In January 2012 I was blessed with my daughter. So here I had to balance being a mum, a wife and a PhD student. Honestly this was not an easy task, the pressure can be too much if you do not have a good support system. There were days I felt like I would lose it; research can take you to those extreme regions because of the unpredictable nature. I thank God for my husband. He has been the best support system.

There were so many days that I would come home and just cry, maybe because something I had been working on for a long time did not work as I expected, but he was very patient and he would encourage me to keep pushing.
He did this to the very end. He and my daughter have been my greatest supporters.

This brings me to something very important, a dedicated support system is very vital in a PhD journey, you need it, it can get stressful sometimes. You need friends and family who will keep pushing you.

I was the only black Physics PhD female (student) in my department and honestly, I did not focus so much on this, so I never quite felt any different. I had very supportive colleagues who made graduate school awesome.

My research was in the field of Experimental Nuclear and Hadronic Physics. In the simplest terms, we use the nucleus as a “laboratory” to study fundamental interactions. So why is all this important? Well, it’s because it enables us to understand the fundamental building blocks of nature.

There are so many things you can do with a Nuclear Physics degree. I should also note that Nuclear Physics is a very wide field but some of the applications are Nuclear Medicine, Forensic studies, Nuclear Power et al. One can also transfer the skills they acquire into different fields such as data science, finance, biomedical research … so many options.

There is also the academia realm, where one can opt to teach.

I want everyone to know that anyone can achieve anything you want in life. You just must reach for the stars and trust in God, for He makes things beautiful in His time. My greatest wish is that there is someone out there motivated to keep going and follow their dreams. Challenges along the way should propel you to keep going and not discourage you.

If I could influence more women to pursue STEM related subjects, then I will be the happiest person.

TSC Replacement Posts: Teachers working under the TSC internship program are free to apply for the advertised permanent replacement vacancies. This was announced on the...
Read more

Teachers Salary Scale in Kenya: How much do teachers earn in this country? Well, this question can only be answered by looking at their...
Read more

TSC Replacement 2020: The Teachers Service Commission (TSC) will employ teachers to replace those who left the profession in the last quarter of last...
Read more

Liz Simiyu: Don’t do it for free if it can give you extra income

Extra Income Sources: Liz Simiyu-Bisher is an engineer, entrepreneur, founder and CEO of Slim Therapy – a weight-loss and wellness group of spas in...
Read more
- Advertisement -